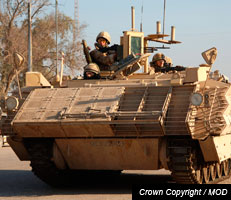 The cost-effective delivery of an armoured vehicle capability

The suspension and cancellation of a number of key armoured vehicle projects since the 1998 defence review has resulted in the Armed Forces facing a significant shortage in the principal armoured vehicles they require, until at least 2024-2025.

"The MOD's standard route for acquiring priority equipment has not been working in the case of armoured vehicles. Too many major projects have been cancelled, suspended or delayed and the Armed Forces will not be fully equipped with the vehicles they need to carry out their full strategic remit until at least 2024-2025.

"While some of the lessons learned from the successful use of the Urgent Operational Requirements process can be applied to core projects in the future, a long term solution is likely to need significant further investment, realistic plans and stable budgets sustained over time."

The suspension and cancellation of a number of key armoured vehicle projects since the 1998 defence review has resulted in the Armed Forces facing a significant shortage in the principal armoured vehicles they require, until at least 2024-2025.

Today’s National Audit Office report found that the Department’s standard acquisition process has been undermined by a combination of over-ambitious requirements and unstable financial planning. Despite the commitment of considerable resources, since 1998, the MOD has received only a fraction of the armoured vehicles it has set out to buy through its standard acquisition process.

The Department’s reluctance to compromise in setting technologically demanding requirements under its standard acquisition process has put the timely and cost-effective delivery of the equipment at risk. Unwieldy procurement processes have not coped well with rapid changes to equipment requirements in the light of operational experience, resulting in a number of armoured vehicle projects being delayed or abandoned.

Armoured Vehicle projects have also suffered from unstable budgets and continual changes to financial plans. As the NAO reported in its Strategic Financial Management of the Defence Budget report, the cycle of unrealistic planning followed by cost overruns has led to a need to find additional short-term savings on a regular basis. Spending to date includes £321 million on cancelled or suspended projects and a further £397 million funding on-going, but delayed, projects. Without significant additional investment sustained over time, the Department will have a shortfall in the armoured vehicles it says it needs until at least 2024-2025.

To address shortfalls in equipment for current operations, such as in Afghanistan, the Department has placed greater reliance on the Urgent Operational Requirements (UORs) since 2003, at an additional cost of £2.8 billion. This has been more successful and has significantly improved protection levels for UK forces against today’s threats. The UOR process is not a sustainable substitute for the standard acquisition process. While some UOR vehicles may be taken into the core fleet, the Department does not expect these vehicles to offer a long-term solution to its armoured vehicle needs.