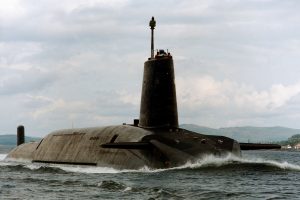 This landscape report aims to help Parliament better understand the complexities of the Defence Nuclear Enterprise by describing how the Ministry of Defence needs to bring together its programmes, including production of the new deterrent submarines, to provide a continuous at sea deterrent.

The Ministry of Defence (the Department) maintains a submarine-based nuclear deterrent to support the government’s national security policy. It currently operates four nuclear-armed deterrent submarines: the Vanguard class. To do this, the Department relies on a network of programmes, equipment and people, often referred to as the Nuclear Enterprise (the Enterprise). Its work includes designing, producing and maintaining submarines and nuclear warheads, and providing the necessary estate, people and support.

In 2008, we reported on the future nuclear deterrent. We concluded that, despite early progress, value-for-money risks relating to costs, decision-making and governance needed to be managed.

This landscape report looks at the Enterprise more broadly than our 2008 report. It aims to help Parliament better understand the complexities of the Enterprise by describing how the Department needs to bring together its programmes, including production of the new deterrent submarines, to provide a continuous at sea deterrent. In particular, we describe:

We have not evaluated the value for money of the Enterprise or commented on the overarching policy.

Our 2008 report on the nuclear deterrent recommended that the Department address significant risks, particularly around costs, skills, commercial relationships and delivery to schedule. Some of these risks remain 10 years later. In the last 18 months, the Department has made some positive changes to the way it manages the Enterprise and has agreed commercial arrangements designed to improve cost and performance. However, the coming years are crucial. As the Department invests heavily in the Dreadnought-class submarines and more widely across the Enterprise, it needs to ensure that the new structures, processes and its workforce operate effectively together to maintain the nuclear deterrent. We plan to review aspects of the Enterprise further as these arrangements evolve.