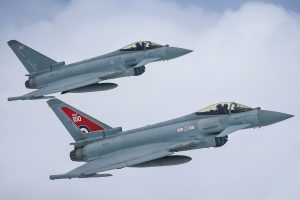 This report assesses the robustness of the Ministry of Defence's financial data and assumptions for its Equipment Plan 2018-2028.

The Ministry of Defence’s (the Department’s) Equipment Plan 2018 to 2028 (the Plan) sets out its equipment and support budget for the period 2018 to 2028. The Plan includes equipment already in use, such as the Typhoon combat aircraft, as well as equipment in development, such as four new nuclear-armed submarines. For the next 10 years, the Department will allocate more than 40% of its total budget to its equipment and support programmes. Consequently, it needs to manage the Plan effectively in order to maintain the stability of the wider defence budget and to ensure that the Armed Forces have the equipment they need to meet their objectives.

The Department introduced the Plan in 2012 following a period of poor financial management, during which a significant gap developed between forecast funding and costs across the defence programme. This led to a cycle of over-committed plans, short-term cuts, and the re-profiling of expenditure, which resulted in poor value for money and reduced funding for front-line military activities. At the request of the then Secretary of State, we provide Parliament with a commentary on the Plan when it is published each year, and assess the robustness of its underlying assumptions.

In this report, we summarise our assessment of the robustness of the Department’s financial data and assumptions for its Equipment Plan 2018 to 2028. In particular, we review how the Department:

We do not consider the value for money of the various projects mentioned in this report or comment on the extent to which the Department can make the programme affordable. We intend to examine and report on affordability further once the Modernising Defence Programme review has concluded.

The Department’s Equipment Plan remains unaffordable, with forecast costs exceeding budgets by £7.0 billion over the next 10 years. This variance could increase or decrease depending on different circumstances, with the Department estimating a worst-case scenario of costs increasing by £14.8 billion should all the identified risks materialise. However, some of its analysis remains optimistic and costs could increase further. The Department is improving its understanding of affordability risks, but we are not yet fully confident in the robustness of some of its underlying assumptions, particularly around efficiencies.

The Department recognises that continued unaffordability of the Plan is not sustainable and has presented the nature and scale of the challenges it faces more clearly in its latest Plan. However, as we have previously recommended, it still needs to undertake the necessary analysis and make the decisions needed for the Plan to be affordable. In January 2018, it established MDP to take the action needed to close the affordability gap, but this work has not yet concluded. Given that 84% of the identified affordability challenge falls in the next four years, the Department must make decisions now. During the current period of uncertainty, the Department has resorted to short-term decision-making, increasing the longer-term risks to value for money and the likelihood of returning to past poor practices.