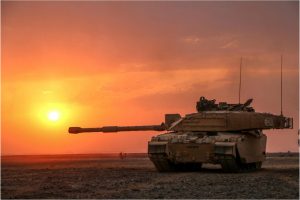 The Ministry of Defence (the Department) Equipment Plan report 2019 to 2029 (the Plan), sets out its spending plans for the next 10 years. It assesses whether its equipment and support programmes are affordable and sets out its expected expenditure on projects to equip the Armed Forces. The Plan summarises the Department’s investment programme over a 10-year period because of the long-term nature of large, complex defence projects. It includes equipment already in use, such as the Hercules aircraft, and in development, such as the Type 26 global combat ship.

During the period of this Plan the Department has allocated a budget of £181 billion to equipment and support projects, 42% of its entire budget. It needs to manage this expenditure effectively to ensure the Armed Forces can secure and maintain the equipment they need to meet their military objectives. The Department protects some of this budget to ensure it is spent on equipment, but financial pressures across its wider defence budget can reduce the money available for equipment and support projects.

The Department introduced the Equipment Plan in 2012 after a period of weak financial management, which led to a significant gap between funding and forecast costs across the defence programme. As a result, a cycle of over-committed plans, short-term spending cuts and re-profiling of expenditure resulted in poor value for money and reduced funding for front-line military activities. At the request of the then Secretary of State for Defence, we provide Parliament with an annual commentary when the Department publishes the Plan. The purpose of our report is to assist Parliament in evaluating the Department’s assessment of affordability and its response to the financial challenges it faces.

This report examines the Department’s approach to assessing the affordability of its Equipment Plan 2019–2029, including our review of the assumptions on which its assessment is based. We completed this review in November 2019. This year, we give greater attention to examining the Department’s approach to managing the continued funding shortfalls, and the consequences of its approach. In doing so, we draw on the wider lessons from our assessments of government’s financial planning.

We do not consider the value for money of the specific projects mentioned in this report. Nor do we comment on the specific prioritisation or operational judgements that the Department needs to make to develop an Equipment Plan that is affordable and meets future defence needs. This report focuses on the scale of affordability challenge that the Department faces, and its response. We are carrying out separate work on the Department’s approach to introducing military capabilities.

For the third successive year, the Equipment Plan remains unaffordable. The Department’s central estimate of equipment procurement and support costs is lower than last year, but this reflects a restatement of the affordability gap rather than actions to address the funding shortfalls. The Department has still not taken the necessary decisions to establish an affordable long-term investment programme to develop future military capabilities. It has responded to immediate funding pressures by strengthening its management of annual budgets and establishing controls on future expenditure on equipment and support projects. It is also seeking to develop a more realistic assessment of affordability but has not yet addressed inconsistencies in the cost forecasts which support it.

However, the Department has become locked into a cycle of managing its annual budgets to address urgent affordability pressures at the expense of longer-term strategic planning, and is introducing new commitments without fully understanding the impact on the affordability of the Plan. It is not, therefore, using the Equipment Plan as a long‑term financial management tool, as it was originally designed to be. The Department’s continued short-term decision-making is now leading to higher costs and reduced capabilities. There is evidence that these problems are growing and increasingly affecting the Armed Forces’ ability to maintain and enhance their capabilities. As a result, there are increasing risks to value for money from the Department’s management of the Equipment Plan.