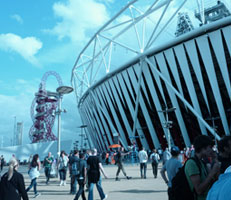 The NAO has underlined the success of the 2012 Games and stressed the importance of building on that success to deliver legacy benefits.

"Few could have envisaged how successful the London 2012 Games would turn out to be. The construction programme was completed on time and within budget, 11 million tickets were sold and our athletes excelled. Crucially, the Games passed off without major transport disruption or security incident. "The operational costs within the 2007 Public Sector Funding Package increased markedly, including an extra £500 million needed for venue security. Nevertheless, taken as a whole, the Games were a success by any reasonable measure and it looks as if not all of the Funding Package will be used. "There has been progress in setting up arrangements to strengthen coordination and oversight of delivery of the planned legacy of the Games. The Cabinet Office will now have to exercise strong leadership to ensure the longer-term benefits are delivered."

In a review of the London 2012 Games, the National Audit Office has underlined the success of the Games and stressed the importance of building on that success to deliver the promised legacy benefits.

Today’s report to Parliament draws out some of the widely acknowledged successes of the Games. These include the widely praised opening and closing ceremonies and the 11 million tickets sold for the Olympics and Paralympics combined. LOCOG met the huge logistical challenge of recruiting and deploying 70,000 volunteers and medal targets were exceeded, with the Olympic and Paralympic teams winning 65 and 120 medals respectively.

Since London was awarded the Games in 2005, the Government’s preparations and management of the £9.3 billion Public Sector Funding Package have been led throughout by the Department for Culture, Media and Sport. According to today’s report, there is likely to be a £377 million underspend against the £9.3 billion Public Sector Funding Package, though the final position depends on the accuracy of assumptions about remaining expenditure and will not be known precisely until 2014. The final position is subject to some remaining areas of uncertainty: for example, the final cost of converting the Athletes’ Village, and of settling outstanding contracts with suppliers.

Since the Funding Package was set in 2007, the operational costs within it have increased markedly; most notably, it has had to cover £500 million additional costs for venue security, for which there was originally no provision. However, the Funding Package as a whole has been able to cover these costs.  The final cost of the Olympic Delivery Authority’s programme to build the venues and associated infrastructure is expected to be around £6.7 billion, compared to the £8.1 billion that was originally available to it.

The Cabinet Office now has central responsibility for coordinating and assuring delivery of the legacy, and these new arrangements are a positive step towards maintaining focus and direction after the Games themselves. With numerous organisations responsible for particular aspects of the legacy, the Cabinet Office will need to provide strong leadership to make the most of the momentum created by the success of the Games. While the future use of the Olympic Stadium is still uncertain, most venues and facilities on the Olympic Park now have an agreed long-term use and legacy tenant.

The spending watchdog also recommends that the valuable skills in project management, contracting and risk management gained by officials who have worked on the Games be deployed on other public sector projects.