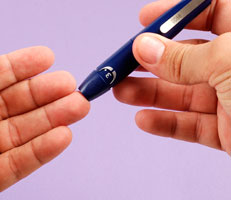 National Audit Office report: The management of adult diabetes services in the NHS

The management of adult diabetes services in the NHS

Diabetes care in the NHS is poor, with low achievement of treatment standards, high numbers of avoidable deaths and annual spending reaching an estimated £3.9 billion.

"The Department of Health has failed to deliver diabetes care to the standard it set out as long ago as 2001. This has resulted in people with diabetes developing avoidable complications, in a high number of preventable deaths and in increased costs for the NHS. "The expected 23 per cent increase by 2020 in the number of people in England with diabetes will have a major impact on NHS resources unless the efficiency and effectiveness of existing services are substantially improved."

The National Audit Office has today issued a report examining whether the NHS in England is providing recommended standards of care to people with diabetes. The report finds that, despite some improvements since 2006-07, there is poor performance against expected levels of care, low achievement of treatment standards and high numbers of avoidable deaths, and concludes that diabetes services in England are not delivering value for money.

In 2009-10, there were an estimated 3.1 million adults with diabetes in England. The number of people with the condition is expected to increase by 23 per cent to 3.8 million by 2020. The Department does not fully understand the cost of diabetes to the taxpayer, but it estimates that it has increased its spending on diabetes services from £0.9 billion in 2006 – 2007 to £1.3 billion in 2009-10. The NAO considers these figures to be a substantial underestimate, based on incomplete data, and estimates that NHS spending on diabetes services in 2009-10 was at least £3.9 billion, or around four per cent of the NHS budget.

According to today’s report, the Department’s data show that only half of people with diabetes received the recommended standards of care in 2009-10, even though the proportion has increased from 36 per cent in 2006-07. The standards, which the Department originally set in 2001, state that people with diabetes should receive nine basic care processes each year. These care processes can reduce their risk of diabetes-related complications such as blindness, amputation and kidney disease. As well as diminishing quality of life, diabetic complications place a significant burden on the NHS.

The risk of developing diabetic complications can also be reduced if people with diabetes achieve recommended treatment standards to control blood glucose, blood pressure and cholesterol levels. However, fewer than one in five people with diabetes are achieving recommended standards for controlling all three of these levels. The Department also estimates that up to 24,000 people die each year from avoidable causes related to their diabetes.

There is significant variation in the quality of care received by people with diabetes. This variation cannot be explained by need or spending alone and is likely to be influenced by the local organisation and management of health services. The Department’s data shows that no primary care trust achieved the aim of delivering all nine basic care processes to all people, with the highest trust scoring 69 per cent and the lowest just 6 per cent.

The Department has not managed effectively the performance of primary care trusts in delivering the recommended standards of diabetes care across the NHS. The NHS also lacks clarity about the most effective ways to deliver diabetes services and does not clearly understand the costs of treating diabetes in the NHS. Through better management of people with diabetes, the NHS could save £170 million a year.