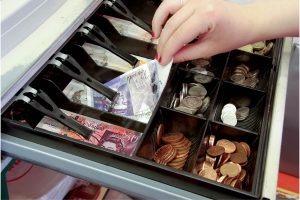 National Audit Office report: The production and distribution of cash

The production and distribution of cash

This report examines the role played by the public bodies involved in operating and overseeing the cash system.

For generations coins and notes have played a central role in society as the primary means of payment. Over £100 billion is spent in shops using coins and notes every year and until 2017 cash was the most frequently used payment method in the UK. The use of cash in transactions is, however, in decline: 10 years ago, cash was used in six out of 10 transactions, and last year it was less than three in 10. Forecasts have suggested that this might fall to one in 10 by 2028. A recent drop in the use of cash during the COVID-19 pandemic may accelerate that trend.

The continuing reduction in the use of cash in transactions is putting pressure on the cash system. Many of the costs of cash production and distribution are fixed. Commercial operators have warned of pressures on their business models, which have previously depended on higher cash volumes to maintain the commercial attractiveness of their operations. Consumer organisations have raised concerns that reductions in the ability of people to access cash, and increasing costs to business of using cash, if not properly managed, may increase the risk of financial exclusion for sections of society dependent on cash.

This report examines the role played by the public bodies in operating and overseeing the cash system at a time of rapid change in society’s use of cash. We assess:

The declining use of cash is placing increasing pressure on the sustainability of the infrastructure for producing and distributing cash. The current approach to overseeing the cash system is fragmented with no clear link between HM Treasury’s overall objective of safeguarding access to cash for those who need it, the outcome that public bodies want to see and the costs associated with that outcome, and the responsibilities of the individual public bodies involved in the cash system. The creation of the coordination group has brought together the key public bodies and helped improve their understanding of the end-to-end cash system. They have been commissioning research to understand consumer needs, but they have yet to establish information systems to track the impact of a rapidly changing cash system on consumers, particularly for disadvantaged consumers whose needs may be greater. The government’s recent announcement to introduce legislation with regard to access to cash, alongside other measures, may provide an opportunity to address some of the issues raised in this report.

The Mint and the Bank share similar objectives for the production of coins and notes but deliver against those objectives in very different ways. Both have been successful in maintaining public confidence in cash against the threat of counterfeiting. However, both have accumulated significant stocks of coins and notes in the face of very different patterns of demand. With the use of cash in transactions in rapid decline, and with the recent renewal of coins and note types now almost complete, the Mint and the Bank need to align their production operations much more closely to likely future needs if they are to demonstrate value for money.