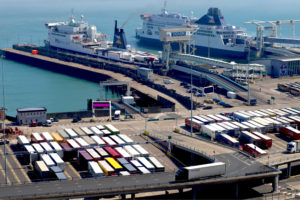 This report examines the government’s progress in managing the border and implementing the Northern Ireland Protocol since the end of the transition period.

On 17 October 2019 the UK and the EU concluded the Withdrawal Agreement, establishing the terms of the UK leaving the EU, and setting out Northern Ireland’s future relationship with the EU and Great Britain (GB) (known as the Northern Ireland Protocol or the Protocol). On 31 January 2020 the UK left the EU, no longer participating in the EU’s decision-making, and entered a transition period during which existing rules on trade, travel and business between the UK and the EU continued to apply. On 31 December 2020, the transition period ended and the Northern Ireland Protocol came into effect.

Since the UK’s decision to leave the EU in 2016, the National Audit Office has reported five times on the management of the UK border, focusing primarily on the government’s preparedness for exiting the EU without a deal. Since we last reported, the transition period has ended, and the new relationship between the UK and the EU has begun. The purpose of this report is primarily to draw together information on the impact of the new arrangements and on future risks which the government must manage. We have done this by:

The government, departments and third parties all faced a very challenging set of circumstances at the end of the transition period. It is a significant achievement that collectively, they delivered the initial operating capability needed at the GB–EU border. However, this capability was achieved in part using temporary measures such as delaying imposing import controls, putting in place easements and providing direct financial support to businesses to help them continue to trade. The current overall operating model for the EU–GB border is not sustainable, and much more work is needed to put in place a stable operating model that eliminates any risk of WTO challenge from trading partners, does not require any temporary supports, and has clarity and ease of use for border users.

Regarding Northern Ireland, the arrangements that the UK government put in place to help facilitate trade into Northern Ireland from GB have been of value. However, it is very unlikely that all the systems, infrastructure and resources could have been put in place to implement the Protocol when grace periods were due to expire on 1 October 2021. The UK government’s position is that the ending of the grace periods would impose potentially unsustainable challenges for authorities and businesses, and it intends to continue operating the Protocol on the current basis to allow time for further discussion with the EU. It is critical that UK government departments and devolved Northern Ireland departments deliver quickly on any agreement reached between the UK and the EU and put in place the systems, infrastructure and resources required to make it work.