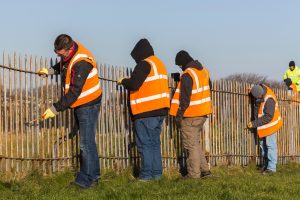 The Ministry of Justice (the Ministry), through HM Prison & Probation Service (HMPPS), is responsible for probation services in England and Wales. As at September 2018, 257,000 offenders were supervised by probation services, which are delivered in courts, prisons and in the community. In 2013, the Ministry embarked on major reforms of probation services. It dissolved 35 self-governing probation trusts and created 21 Community Rehabilitation Companies (CRCs) to manage offenders who pose a low or medium risk of harm. It created a public sector National Probation Service (NPS) to manage offenders who pose higher risks. In February 2015, the CRCs were transferred to eight, mainly private sector, suppliers working under contracts, managed by HMPPS, that were to run to 2021-22. The Ministry considered that its reforms would deliver reductions in reoffending corresponding to £10.4 billion net economic benefits to society over the seven-year period of the contracts. In July 2018, the Justice Secretary acknowledged that the quality of probation services being delivered was falling short of expectations and announced that the Ministry will terminate its CRC contracts 14 months early, in December 2020. The Ministry has consulted on the future of probation services and plans to procure second-generation contracts in April 2019.

This report takes stock of the Transforming Rehabilitation reforms following the decision to terminate the CRC contracts. It builds on our previous work and examines the Ministry’s:

The Ministry set itself up to fail in how it approached the Transforming Rehabilitation reforms. Its rushed implementation introduced significant risks that its chosen commercial approach left it badly placed to manage. The consequences of these decisions are far-reaching. CRCs have underinvested in probation services, which have suffered as a result. There is little evidence of hoped-for innovation and many of the early operational issues, such as friction between the NPS and CRCs, persist. Although the number of reoffenders has reduced, the average number of reoffences they commit has increased significantly. Transforming Rehabilitation has achieved poor value for money for the taxpayer. The Ministry has chosen to end the CRC contracts in 2020, 14 months early, but this comes at a cost. When added to previous, unsuccessful, efforts to stabilise CRCs, the Ministry will pay at least £467 million more than was required under the original contracts. It now estimates it will pay up to £2.3 billion under the contracts. This is still less than the £3.7 billion expected at the outset of the reforms, but little progress has been made on transforming probation services. The Ministry has consulted on the next generation of contracts and its proposals address many of the issues that have caused problems. But it has limited time to procure the new contracts, and in persisting with the split between the NPS and CRCs, it will still need to manage risks posed by the interfaces between these organisations and the wider system. It also needs to make sure that the quality of probation services is improved and maintained during the transition from the existing contracts to the new ones.

Reforms to probation services have failed to meet the MoJ’s targets to reduce reoffending & cancelling contracts with probation providers early comes at an additional cost to the taxpayer. Find out more in this video.