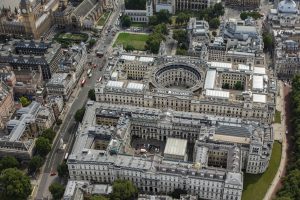 This report focuses on the role of the centre of government in supporting government departments' oversight of arm's-length bodies.

Government relies on arm’s-length bodies (ALBs) to carry out a range of important functions to deliver departments’ strategic objectives. In the past five years, new ALBs have been created to regulate the environment, higher education and social workers. Others have been created to advise on topics such as national infrastructure, international trade disputes, and aviation noise complaints. EU Exit means government is now responsible for functions previously delivered by the EU. This has resulted in the creation of new ALBs, such as the Office for Environmental Protection.

The Cabinet Office, HM Treasury and sponsor departments have a role in deciding what type of ALB is set up and how it is overseen. The Cabinet Office oversees the ALB landscape and provides support and guidance to departments on the creation, governance and oversight of ALBs. Both the Cabinet Office and HM Treasury jointly approve business cases for new ALBs. Departments oversee their own ALBs by using a framework agreement that sets out the role of the ALB and lines of accountability. In the past decade, the National Audit Office (NAO) has published a range of work on ALBs, highlighting that types and classifications of ALBs are inconsistently applied and that departments take different approaches to oversight.

This report focuses on the role of the centre of government (the Cabinet Office and HM Treasury) in supporting government departments and ALBs. It examines:

• the ALB delivery landscape and the other delivery models available to government;
• the processes in place to support a department as it sets up an ALB;
• how ALBs are overseen by departments and the centre of government; and
• the Cabinet Office’s plans for reform of the public bodies landscape.

It analyses the business cases for bodies whose introduction was proposed between 2016 and the end of 2020. It does not consider the work of local authorities or devolved administrations. When discussing ALBs, the NAO refers to those bodies administratively classified as such by the Cabinet Office – namely executive agencies, non-departmental public bodies and non-ministerial government departments. This is separate from the wider ONS classification of public sector bodies.

In 2018-19, ALBs spent £265 billion and employed around 300,000 people to deliver the government policies and public services we depend on in vital areas such as healthcare, education and housing. The UK’s exit from the EU and the COVID-19 pandemic have meant the UK government has assumed more responsibility for key functions in areas such as environmental protection and business support. The flexibility of arm’s-length arrangements allows public bodies to develop technical expertise and operational independence, but it is important that ALBs remain accountable, are properly managed and have the necessary support. In some areas the centre of government and departments have improved how they work with, and support, ALBs.

However, the continuing inconsistency in how ALBs are set up and overseen is a barrier to further improvement. More needs to be done to share lessons across organisations, identify opportunities to improve the complex systems in which policies and services are delivered, and understand when a delivery model is no longer working effectively. The centre of government needs to make considerably more progress in understanding the risks in relation to ALBs so it can clarify the expectations and criteria for different ALB models and their oversight arrangements. It also needs to work with departments and ALBs to ensure that requirements, guidance and good practice are effectively implemented and monitored.