This report focuses on the arrangements for converting schools to academies. We assess the Department for Education’s approach and the extent of conversion; the robustness, cost and speed of the conversion process; and the availability of sponsors and multi-academy trusts to support schools to convert to academies.

Academy trusts acquire substantial new freedoms and responsibilities that maintained schools do not have, including responsibility for financial as well as educational performance. It is therefore vital that the Department has assurance that academy trusts have capacity and capability to run academy schools well and that they can be trusted to manage large amounts of public money.

This report focuses on the arrangements for converting schools to academies. We assessed:

We did not examine the performance of schools once they have become academies. We also did not cover the Education and Skills Funding Agency’s regulation and oversight of academies, or its intervention in academies about which it has concerns. 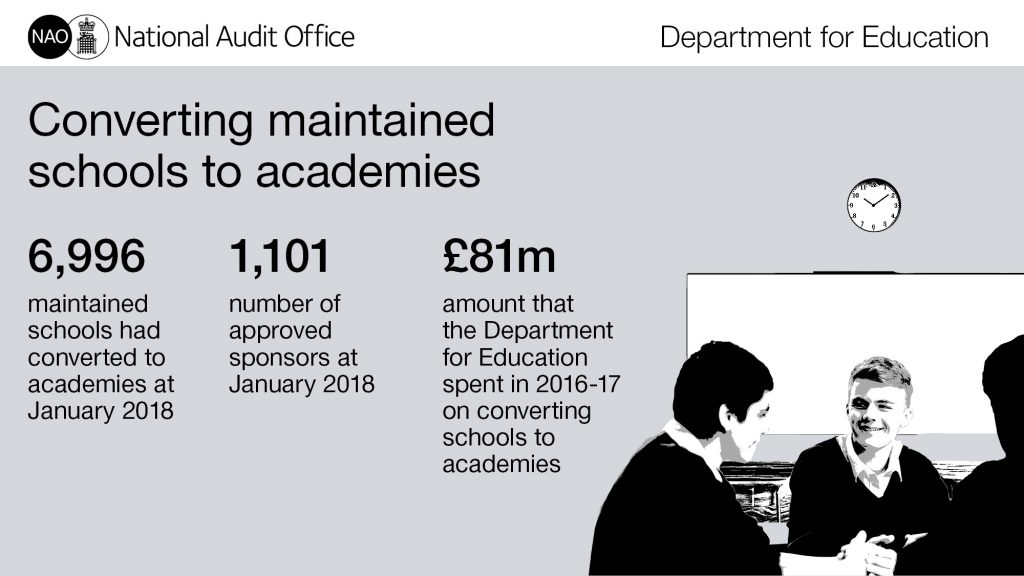 By January 2018 the Department had converted nearly 7,000 maintained schools to academies, at an estimated cost of £745 million since 2010-11. Most of the academies had been performing well as maintained schools, making conversion relatively straightforward and the Department has rejected or deferred very few applications. It has, however, taken longer than intended to convert a sizeable proportion of underperforming schools that it considers will benefit most from academy status. More recently the Department has started to be more rigorous in its scrutiny of applicants’ financial sustainability and governance.

Challenges are likely to increase in the future. The Department has not explicitly set out its current policy, but it is unclear how feasible it will be for it to continue to convert large numbers of schools. Most schools that are still maintained by local authorities are primary schools. These include small, sometimes remote, schools that tend to be less easy to integrate into multi-academy trusts. There is substantial variation across the country, in the relative proportions of maintained schools and academies and in the availability and capacity of sponsors to support schools most in need. This complicated position means that it is incumbent on the Department to clarify its policy and make sure that the school system is coherent with all of its parts working effectively together. This will be crucial to secure value for money and provide children with access to good end-to-end schooling.