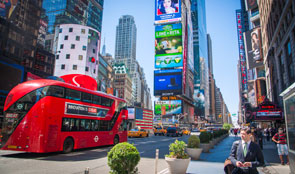 The GREAT campaign enables government organisations to adopt consistent and effective brand management. To date, Cabinet Office has reported a return of £1.2 billion on its £113.5 million GREAT campaign investment. This is based on anticipated as well as actual expenditure by business, tourists and students.

"The £1.2 billion reported by the Cabinet Office as a return on its £113.5 million campaign investment is based on anticipated as well as actual expenditure by business, tourists and students. Achieving the full return depends therefore on their intentions being realised as actual spending. To optimise value for money in future, the campaign needs to allocate resources based on a clear analysis of which partners are likely to generate economic activity of proven benefit to the UK economy.”

The National Audit Office has commended a government global campaign to promote the UK overseas as meeting good practice from a brand communication perspective.

The £113.5 million GREAT Britain campaign, formally launched in February 2012, is the government’s major branding campaign to promote the UK as a destination for tourists, trade and investment and students, in order to secure economic growth. The Cabinet Office has allocated the funding to five partner organisations – UK Trade & Investment (UKTI), the Foreign & Commonwealth Office (FCO), British Council, VisitBritain and VisitEngland – for the 2012-2015 period.

The campaign team has produced high quality communication materials and teams overseas are, for the most part, making good use of them and adhering to brand discipline. However, not all of the partner organisations consistently use GREAT campaign branding materials.

Before the GREAT campaign, there was no consistent approach to country branding or promoting the UK overseas. The campaign has clear objectives and its board, supported by the Cabinet Office, provides effective governance. The Cabinet Office team manages the GREAT campaign well and has created strong marketing and communications tools and materials.

The partners’ delivery of the campaign varies and is improving as the campaign matures. There is a process for prioritising countries and determining the level of funding to them. This has become increasingly evidence-driven. However, the Cabinet Office does not adequately assess the capacity of partners to spend the funding allocated to them. The NAO also finds that UKTI and FCO could push priority country teams further to demonstrate value for money on their campaign activities before finalising funding.

The GREAT campaign gives partners an extra funding stream which enables them to undertake more activity overseas. It has successfully attracted endorsement and sponsorship from the private sector.

The Cabinet Office has confirmed a return of £1.2 billion (based on actual and anticipated expenditure) against a target of £1.7 to £1.9 billion to the UK economy by 2019-20. Performance to date indicates that the targets for individual partners are realistic within the 5 years. However, these lengthy timescales will require partners, particularly UKTI and FCO, to be vigilant in their reporting and monitoring.