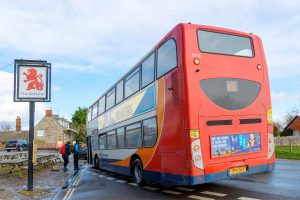 In 2019, buses accounted for 56% of public transport journeys by those living in England outside London, or an average 5.8 million passenger journeys each day. Despite a long-term shift to private car use, buses still support millions of essential daily trips, and for many people provide the only practical, frequently used method of transport, other than walking. Bus use is particularly common for people aged from 17 to 20 and over 70, and for women and girls, most ethnic minority groups, and people on lower incomes. Reliable, affordable bus services contribute to achieving the policy objectives of two thirds of government departments, from reducing health inequalities to access to justice.

The Department for Transport is responsible for the bus policy framework, ad hoc capital funding to local authorities and operators, and legislation. It provides information to support The Ministry for Communities, Housing and Local Government in determining the overall funding for local government. Over more than 30 years, the Department has stated an aim to increase bus use and halt the decline that has continued since the 1950s. In some periods this has been expressed as a formal Departmental objective, although not currently.

The National Audit Office and the House of Commons’ Committee of Public Accounts last examined bus services in 2005 and 2006 respectively. This report examines the effectiveness of government’s support for buses, and the extent to which the enablers are in place for local authorities and operators to realise the long-term, sustained improvement that the Department now intends.

We do not examine the value for money of the Department’s emergency COVID-19 interventions. Although the issues we highlight pre-date the COVID-19 pandemic, we consider they remain and have been brought into sharper relief by its effects. This report does not examine voluntary and community transport providers. Our examination excludes bus services in London, where the delivery model is different from the rest of England, although we draw on comparisons with London where useful.

Bus services have been declining across England for 70 years and the decline continued following deregulation, with only a few local authorities managing to buck the trend. However, government recognises that affordable bus services have public value, and funds around 24% of bus operators’ revenue income. Government has chosen to deliver public bus services via a deregulated market model, and sensibly devolves decisions about supporting services to local authorities, who understand local needs.

The Department is not accountable for delivering bus services, but it has national policy responsibility. It is now preparing to commit significant new funding to bus services and to lead a national strategy for improvement against a background of considerable uncertainty. The Department collects data on buses and can show it has funded valuable improvements, but to date it has not sought to demonstrate how its actions have contributed to supporting optimal value for money across the bus system. If it is to work with and through others at central and local level, make informed choices about funding, and be able to adjust its plans to ensure it meets its objectives, it will need greater clarity on what it wants to achieve and how it will know when it has done so. During the COVID-19 pandemic, the Department has come together with local authorities and operators, intervening rapidly to target the weakest areas and keep buses running, which offers learning for the future.