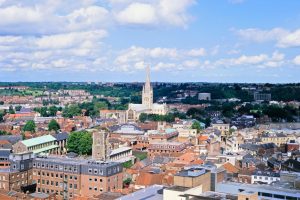 This new report responds to a request from the Environmental Audit Committee to examine local government and net zero.

In June 2019, the UK government passed legislation committing it to achieving ‘net zero’ greenhouse gas emissions by 2050. This is significantly more challenging than government’s previous target to reduce net emissions by 80% compared with 1990 levels by 2050. Achieving net zero will require changes that are unprecedented in their scale and scope, including changes to the way electricity is generated, how people travel, how land is used and how buildings are heated.

In its December 2020 report, Achieving net zero, the NAO highlighted that local authorities will have a critical part to play. There are 333 principal local authorities and 10 combined authorities (as well as the Greater London Authority) in England, between them providing a range of services to people in their areas which impact on net zero, such as transport planning, social housing and recycling and waste services. The services provided by individual local authorities vary with their powers and functions.

This new report responds to a request from the Environmental Audit Committee to examine local government and net zero. It considers how effectively central government and local authorities in England are collaborating on net zero, in particular to:

The report does not examine how national and local government are collaborating on net zero in Scotland, Wales and Northern Ireland.

While the exact scale and nature of local authorities’ roles and responsibilities in reaching the UK’s national net zero target are to be decided, it is already clear that they have an important part to play, as a result of the sector’s powers and responsibilities for waste, local transport and social housing, and through their influence in local communities. Government departments have supported local authority work related to net zero through targeted support and funding. However, there are serious weaknesses in central government’s approach to working with local authorities on decarbonisation, stemming from a lack of clarity over local authorities’ overall roles, piecemeal funding, and diffuse accountabilities. This hampers local authorities’ ability to plan effectively for the long-term, build skills and capacity, and prioritise effort. It creates significant risks to value for money as spending is likely to increase quickly.

MHCLG, BEIS and other departments recognise these challenges and are taking steps to improve their approach. Their progress has understandably been slowed by the COVID-19 pandemic, but there is now great urgency to the development of a more coherent approach, including because of the imminence of the next United Nations climate conference, COP26.