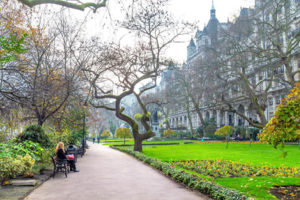 This report examines if government is achieving its ambition for the public sector to be a leader in decarbonising its activities.

In June 2019, Parliament passed an amendment to the Climate Change Act 2008 committing the UK to achieving ‘net zero’ greenhouse gas emissions (emissions) by 2050. This means reducing emissions substantially from current levels, with residual emissions in 2050 being equal to or less than what is removed from the atmosphere by either the natural environment or carbon capture technologies, such as tree planting or engineered removals. The government estimates that emissions from public sector buildings account for around 2% of total UK emissions.

Since 2010-11, the government has also agreed targets with central government (government departments and their partner organisations) to reduce their emissions as part of the Greening Government Commitments (GGCs). The current targets are set by the Department for Business, Energy & Industrial Strategy (BEIS) through negotiation with individual departments to reduce their emissions by the end of 2024-25 compared with a 2017-18 baseline. Departments’ targets range from achieving a 10% reduction to a 43% reduction in direct emissions and a 27% to 69% reduction in overall emissions. The Department for Environment, Food and Rural Affairs (Defra) has overall responsibility for the GGC framework. HM Treasury has responsibility for setting annual reporting requirements in central government.

This report examines the extent to which the government measures and reports public sector emissions in line with its ambition for the public sector to be a leader in decarbonising its activities. It examines:

Central government departments have reported notable progress in reducing their direct emissions over the past decade. The GGCs have provided a broadly stable framework within which departments can measure and report progress against targets. HM Treasury’s Sustainability Reporting Guidance has begun to set expectations for what stakeholders, and Parliament, might expect to see in the annual reports of public bodies. However, there are inconsistencies in which bodies are and are not reporting within the GGC framework, patchy compliance with HM Treasury’s reporting guidance and a lack of clarity about what is expected of the rest of the public sector.

In part, the current inconsistencies mirror a lack of coherence in the oversight and support provided by the centre of government on the measurement and reporting of public sector emissions. All public sector bodies need to understand the likely costs of delivering their decarbonisation targets so that they can effectively prioritise action and investment. And with better, more consistent data, central government departments could improve cost estimation and inform priorities for reducing emissions. This will require active leadership from the centre of government to strengthen its management of the measurement and reporting regime.