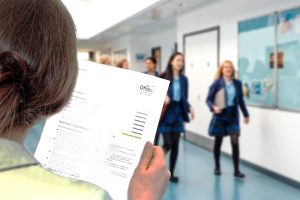 This report examines whether Ofsted’s approach to inspecting schools is providing value for money. We assessed Ofsted's role, performance and impact.

The Office for Standards in Education, Children’s Services and Skills (Ofsted) inspects and regulates services that care for children and young people and services that provide education and skills for learners of all ages. Ofsted seeks to be “a force for improvement through intelligent, responsible and focused inspection and regulation”. It publishes reports of its findings and reports to ministers on the effectiveness of services. In 2017-18, Ofsted spent £151 million.

This report examines whether Ofsted’s approach to inspecting schools is providing value for money. We assessed:

The Department for Education (the Department) plays an important part in whether the inspection of schools is value for money. The Department affects Ofsted’s funding, how it uses its resources and what it can inspect. The current inspection model, with some schools exempt from re-inspection, others subject to light-touch inspection and the average time between inspections rising, raises questions about whether there is enough independent assurance about schools’ effectiveness to meet the needs of parents, taxpayers and the Department itself. Although government has protected the overall schools budget, it has reduced Ofsted’s budget every year for over a decade while asking it to do more. We think that government needs to be clearer about how it sees Ofsted’s present and future inspection role in the school system as a whole, and resource it accordingly.

Ofsted provides valuable independent assurance about schools’ effectiveness and as such is a vital part of the school system. It has faced significant challenges in recent years, as its budget has reduced and it has struggled to retain staff and deploy enough contracted inspectors. The ultimate measure of the value for money of Ofsted’s inspection of schools is the impact it has on the quality of education, relative to the cost. Ofsted’s spending on school inspection has fallen significantly but it does not have reliable information on efficiency. It also has limited information on impact. Until Ofsted has better information it will be unable to demonstrate that its inspection of schools represents value for money.