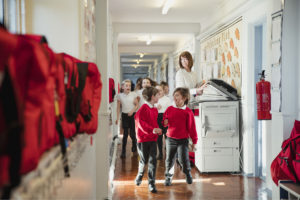 This report examines the Department for Education’s funding provision and distribution of funding for mainstream schools in England.

The NAO reported on the financial sustainability of schools in 2016, and concluded that the Department for Education’s (the Department’s) overall schools budget, as set out in the 2015 Spending Review, was protected in real terms but did not provide for funding per pupil to increase in line with inflation. Therefore, mainstream schools would need to find significant savings to counteract cost pressures.

This report focuses on the Department’s funding for mainstream schools in England, and updates aspects of our 2016 report on the financial sustainability of schools. We examined whether the Department:

After real-terms reductions in school funding in the two years to 2018-19, the Department has since increased funding and plans further rises. Because of growing pupil numbers, average per-pupil funding was virtually unchanged in real terms between 2014-15 and 2020-21. The increases in cash funding did not cover estimated cost pressures between 2015-16 and 2019-20 but were projected to exceed them in 2020-21, although the Department has not factored in the potential impact of COVID-19 in this assessment.

With the introduction of the national funding formula, the Department has met its objective of making its allocations more predictable and transparent. However, it is difficult to conclude definitively on whether the Department has met its objective of allocating funding fairly with resources matched to need. There has been a shift in the balance of funding from more deprived to less deprived local areas. This shift has resulted mainly from changes in relative need and the introduction of minimum per-pupil funding levels. Although more deprived local authorities and schools continue on average to receive more per pupil than those that are less deprived, the difference in funding has narrowed. The Department must evaluate the impact of the national funding formula and minimum funding levels over time and use that information to inform whether further action is needed to meet its objectives.