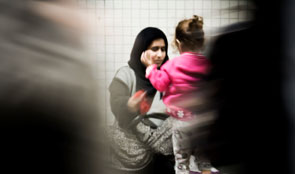 UK Government says it is on track to meet target to resettle 20,000 Syrian refugees by 2020. Local authorities’ ability to secure suitable school places and houses a risk to success. NAO estimate programme will cost £1.12bn by 2020.

“The programme team achieved a great deal in a short amount of time, resettling much larger numbers of refugees than previous programmes, due in large part to the dedication and goodwill of those involved.The characteristics of the refugees arriving in the UK will become clearer over time. With this new information, the programme team must adapt budgets so that no organisation taking part in the programme struggles to participate effectively due to cost pressures.”

The programme team has secured enough indicative pledges from local authorities to meet the target, but it is essential that these pledges materialise into firm offers of support. The programme is only open to Syrian refugees registered in Jordan, Lebanon, Iraq, Egypt and Turkey.

The NAO found that in achieving the target to resettle 1,000 Syrian refugees by Christmas 2015 there was good partnership working across central and local government, strong working relationships with international partners and the goodwill and determination of all organisations involved. While local authorities have worked hard to provide resettlement places, they have not however always understood central government’s expectations of them after the first year of the programme.

Today’s report found that there is no estimate of the total cost of the programme to the UK. Costs fall to different central government departments and participating local authorities. Most of the costs of each refugee’s first year in the UK are covered by the UK’s Official Development Assistance (ODA) budget. This changes in the second year, after which costs for health and education fall to the relevant department, as they do for all citizens. Based on departments’ assumptions about the characteristics of those entering the programme, the services or level of support they will require and unit costs, the NAO estimates the programme could cost the UK up to £1,112 million to the end of 2019-20 and up to £1,734 million over its lifetime.

Refugees told the NAO that their experience of the programme has been largely positive, but uncertainty about their status in the UK has caused some anxiety. Information provided to them by the programme team, local authorities and their partners about where they were being resettled can be patchy and many are unsure of their rights in the UK and what they are eligible for. While some elements of the programme’s redesign are not yet operational, overall the programme team has made progress in redesigning the programme to improve refugees’ experiences.