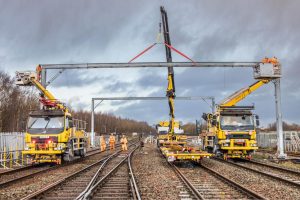 This study examines whether the government and Network Rail are in a position to deliver the Transpennine Route Upgrade successfully.

The Transpennine route is a 76-mile-long rail link in the north of England, which connects Manchester in the west and York in the east via Huddersfield and Leeds. It provides the most direct rail link between Manchester and Leeds, as well as connecting smaller towns and commuter areas. In 2011, the Department for Transport (the Department) announced its intention to upgrade the route. Network Rail, which manages the rail infrastructure in Great Britain, is responsible for delivering the upgrade.

In November 2021, the Department published its Integrated Rail Plan for the North and Midlands. This set out government’s plans for delivering and sequencing major rail investment in the North and Midlands. One element of this plan is Northern Powerhouse Rail, through which government intends to significantly improve connectivity between the North’s major economic centres. The Department announced that the Transpennine Route Upgrade Programme (the Programme) will now be delivered as phase one of Northern Powerhouse Rail. The Programme plans for full electrification of the route, additional track in some sections, new digital signalling, station upgrades, and works to increase the route’s capability to carry freight.

The Transpennine Route Upgrade Programme has had a difficult start, with the Department taking more than a decade to agree a scope. As a result, passengers will have to deal with delays and overcrowding on a route that is at full capacity for longer. The Programme, which is Network Rail’s largest rail upgrade, is now in a good position to proceed with greater certainty following the Department’s Integrated Rail Plan. There is now an agreed scope that should make a real difference to the users of the route and deliver wider benefits to the region if delivered successfully.

The Department and Network Rail are putting in place appropriate structures, such as revised governance and operating model, suitable for a major programme about to go into substantive delivery. However, these arrangements have yet to be tested and many of the changes are still a work in progress. There is still work to be done by the Department and Network Rail to manage key areas of risk and challenge, as well as planning to achieve the intended benefits, if they are to ensure the Programme is in a good position to secure long-term value for taxpayers’ money.