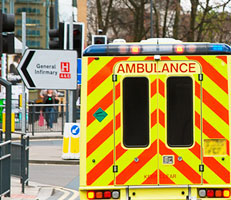 The Department of Health has until recently been focusing on speed of response as a measure of performance of the ambulance service, rather than on clinical outcomes. The service achieves high levels of public satisfaction but there are wide variations in ambulance trusts’ efficiency. The system has not delivered the best value for money to date.

“The time taken to respond to calls has until recently been the be all and end all of measuring the performance of ambulance services. Illustrating the principle that what gets measured, gets done, the result has been a rapid response to urgent and emergency calls. However, this led to an increase in the number of multiple responses to incidents equating to millions of unnecessary ambulance journeys.

“It is welcome that the Department has now introduced new measures and a new broader performance regime but improvements to the whole urgent and emergency care system will depend on its working more coherently.”

The Department of Health has until recently been focusing on speed of response as a measure of performance of the ambulance service, rather than on clinical outcomes for patients, the National Audit Office reports today. The ambulance service achieves high levels of public satisfaction but there are wide variations in ambulance trusts’ efficiency and the NAO concludes that the system has not delivered the best value for money to date.

Over the last ten years, until the beginning of April 2011, the Department has focused on response time targets, rather than taking a more rounded view of whether cost-effective clinical outcomes have been achieved. The 8-minute response target, intended for the most seriously ill patients, is one of the most demanding in the world. However, without more direct measures of patient outcomes, its application has skewed ambulance trusts’ approach to performance measurement and management. This has led to such practices as sending more vehicles than necessary to meet the target, leaving extra vehicles to be stood down. The target is also applied to a much wider group of patients than intended.

The report identifies various inefficiencies in the system. For example, the cost per incident varies between trusts: from £176 to £251. There is scope across the urgent and emergency care system to make more of different ways of responding to patients, such as clinical advice to callers over the phone and taking patients to minor injuries units rather than A&E departments. The NAO estimates that if all 11 trusts adopted the best practice currently being used in at least one trust, this could save the NHS £165 million a year.

The elements of the emergency care system are not yet fully integrated and this leads to delays in turnaround times at hospital A&Es. Over one-fifth of patient handovers take longer than the recommended 15 minutes. This can lead to ambulances having to queue outside hospitals, reducing their availability to respond to other calls.

Improving ambulance trusts’ performance has been hampered by a lack of data on patient outcomes and a lack of comparative information that can be used to benchmark performance. The new clinical quality indicators introduced from April offer the potential for a fuller measurement of performance based on outcomes.