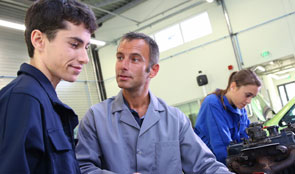 16- to 18-year-old participation in education and training

Value for money for the £7 billion spent on 16- to 18-year-olds has increased overall, but the Department needs better information on which reforms have proven most effective.

“The Department has made significant reforms aimed at encouraging more 16- to 18-year-olds into education and training, and the overall value for money of the annual £7 billion spent on this age group has increased. Although this is encouraging, the Department now needs better information about which of its reforms are effective so that it can decide which to keep, stop or change.”

The overall value for money of the £7 billion spent each year on 16- to 18-year-old learning has increased. However, the Department for Education needs better information on which of its reforms are most effective at encouraging 16- to 18-year olds into education and training and improving the learning they receive.

A key reform is that, since September 2013, young people have had to stay in full-time education or training for a full academic year after Year 11. From 2015, they will have to continue learning until their 18th birthday. The Department is implementing its reforms at the same time as reducing spending on 16- to 18-year-olds. In 2013-14, the Department’s core budget of £7 billion for this age group was 8 per cent lower in real terms than in 2010-11. The Department has removed a major risk to value for money by starting to allocate funding per person rather than per qualification. This removes an incentive for schools and colleges to encourage learners to complete many short courses, not all of which were useful.

By March 2014, 18,500 young people had been recruited onto the Youth Contract, which is aimed at those among 16- to 17-year-olds who are the hardest to reach. More than half of recruits (10,000) have participated in education and training for at least five months as a result of the support received. On current trends, however, only 30,000 out of an estimated 70,000 eligible young people will be helped by the time the programme ends.

The Department has introduced new statutory duties to improve careers advice. But, in 2013, after these duties came into force, Ofsted visited 60 schools and found only 12 that were ensuring all students received sufficient information about career options. After this, the Department clarified the guidance, but it does not yet know if this has led to improvements.

Apprenticeships are getting longer but the total number of people becoming apprentices has fallen. Although plans to increase employers’ involvement in the management of apprenticeships are sensible, there are risks to requiring employers to pay more towards the cost of apprenticeships. The Department aims to address these risks by trialling the new system. Some young people have commenced new traineeships, but the Department needs to increase capacity for this option. To date, only 40 per cent of eligible providers who said they would deliver traineeships have begun to do so.