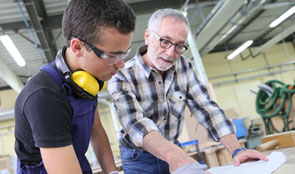 Delivering value through the apprenticeships programme

The Department for Education should set out the planned overall impact of the programme on productivity and growth.

“The Department for Education needs to chart and follow a course from having a lot of apprenticeships to having the right apprenticeships in order to help improve the UK’s productivity, and achieve value for money, in return for the costs of the programme.”

The Department has also not defined what ‘success’ will look like in the reformed programme. Research shows that different apprenticeships offer significantly different benefits, but the Department is not clear about how it plans to use this evidence to maximise the value derived from the mix of apprenticeships undertaken.

In England, an apprenticeship is a full-time paid job, available to those aged 16 or over. It incorporates on and off-the-job training and leads to a nationally recognised certificate. Annual public funding of apprenticeships has grown over time. In 2010-11, it amounted to just under £1.2 billion, but by 2015-16 the figure had risen to around £1.5 billion. Since 2013, there has been a process to develop new, employer-led, apprenticeship ‘standards’, which will eventually replace the previous frameworks.

Furthermore, some employers and industry representative groups are concerned that the approach is leading to a large number of narrow and overlapping standards, which may restrict the extent to which apprentices gain transferable skills.

Employers report high levels of satisfaction with the training offered and benefits experienced, but surveys of apprentices provide a less clear view on quality of delivery. One in five apprentices reported that they had not received any formal training at all, either at an external provider or in the workplace. Ofsted reports suggest that, overall, around a fifth of training providers need to improve the quality of their training and the results they achieve.

The Department is managing individual risks associated with the delivery of components of the current change programme in an appropriate way. It is also developing a more effective approach to managing cross-cutting risks to the programme’s success, but further progress is necessary.

While the Department might reasonably expect the vast majority of employers, training providers and assessment bodies to act properly in response to reforms, a small minority may not behave as expected. The NAO finds that the Department has not yet established what information it will need to monitor key behavioural risks and spot signals that these risks may be maturing.

Among the NAO’s recommendations is that the Department should set out the planned overall impact on productivity and growth, along with short-term key performance indicators to measure the programme’s success, and should develop more robust ways of managing behavioural risks.