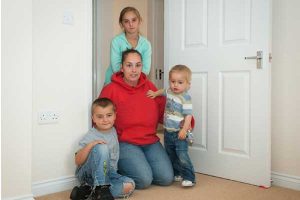 Homelessness has increased across all measures since 2010, with many local authorities now seeing it as a risk to their financial sustainability.

“Homelessness in all its forms has significantly increased in recent years, driven by several factors. Despite this, government has not evaluated the impact of its reforms on this issue, and there remain gaps in its approach. It is difficult to understand why the Department persisted with its light touch approach in the face of such a visibly growing problem. Its recent performance in reducing homelessness therefore cannot be considered value for money”.

Government has not evaluated the impact of its welfare reforms on homelessness, or the impact of the mitigations that it has put in place, according to the National Audit Office.

There were 77,240 households in temporary accommodation in England in March 2017, an increase of 60% since March 2011. These households included 120,540 children, an increase of 73% from March 2011. Homelessness at present costs the public sector in excess of £1 billion a year. More than three quarters of this – £845 million – was spent on temporary accommodation. Three quarters of this spending – £638 million – was funded by housing benefit.

The ending of private sector tenancies has overtaken all other causes to become the biggest single driver of statutory homelessness in England. The proportion of households accepted as homeless by local authorities due to the end of an assured shorthold tenancy increased from 11% during 2009-10 to 32% during 2016-17. The proportion in London increased during the same period from 10% to 39%. Across England, the ending of private sector tenancies accounts for 74% of the growth in households who qualify for temporary accommodation since 2009-10. In addition, it appears likely that the decrease in affordability of properties in the private rented sector, of which welfare reforms such as the capping of Local Housing Allowance are an element, have driven this increase in homelessness.

Today’s report found that the Department for Communities and Local Government does not have a published cross government strategy to prevent and tackle homelessness. It has, however, acknowledged the scale of the challenge and plans to improve the data the government holds on homelessness.

The ability of local authorities to respond to increased homelessness is constrained by the limited options they have to house homeless families. As the NAO set out in its assessment of the housing market in Housing in England: overview, there has been a significant reduction in social housing over the past few decades. While spending by local authorities on homelessness services such as temporary accommodation has steadily increased since 2010, spending on overall housing services has fallen by 21% in real terms over the same period. The proportion of homeless households in temporary accommodation outside their home borough increased from 13% in March 2011 to 28% in March 2017. Almost 90% of these households are from London boroughs.