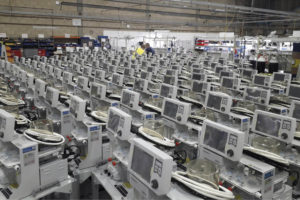 National Audit Office report: Investigation into how government increased the number of ventilators available to the NHS in response to COVID-19

This investigation provides an account of how public money was used to increase the number of ventilators available to the NHS.

Background to the investigation

Ventilators are medical devices that assist or replace a patient’s breathing. Patients with COVID-19 who are admitted to hospital often have problems breathing. On arrival in hospital a patient’s blood oxygen level is measured. If it is low, then the patient may be given: standard oxygen therapy using a mask; non-invasive ventilation where oxygen is delivered under pressure via a mask or helmet; or invasive mechanical treatment using a mechanical ventilator, which takes over a patient’s breathing. Treatment is a judgement for clinicians and patients may undergo more than one treatment during a stay in hospital.

From March 2020, in response to the COVID-19 pandemic, the government increased the number of ventilators available to the NHS. It did this through the Department of Health & Social Care (DHSC), by purchasing ventilators on the global market, as part of a wider DHSC and NHS England and NHS Improvement (NHSE&I) oxygen and ventilation programme; and by the Cabinet Office’s ‘ventilator challenge’, to encourage UK businesses to design and manufacture more mechanical ventilators.

Scope of the investigation

In this investigation we explain:

This investigation is part of a programme of work the National Audit Office is undertaking to support Parliament in its scrutiny of government’s response to COVID-19.

Both Cabinet Office and DHSC started their ventilator programmes on the basis that securing as many mechanical ventilators as possible, as quickly as possible, was necessary to safeguard public health. This urgency was reflected in their approach of: getting the programmes up and running very quickly; protecting their private-sector partners from financial risk; making early commitments to contracts; paying cash upfront for ventilators before they could be inspected; showing a willingness to accept that prices were higher than the normal market rate; deliberately supporting multiple ventilator challenge options; and drawing significantly on technical expertise and capacity from the private sector. In total, the departments spent a total of £569 million across both programmes.

Ultimately, the anticipated urgent demand for ventilators in mid-April did not materialise. Instead, on 15 April Ministers decided to adopt new targets to provide additional resilience in the system and prepare for a potential second wave. By this point, the departments’ earlier urgency meant that the majority of purchase contracts had been entered into, and the task turned into one of identifying the best mix of devices, ensuring they were delivered, identifying which options were no longer required to meet government’s targets and managing the programmes’ overall cost. While the two departments were not able to meet the initial target of 18,000 mechanical ventilators by the end of April, they made substantial progress towards the later target of 30,000 by the end of June. While the number of ventilators now significantly exceeds demand, this means there is more spare capacity should it ever be needed.

Inevitably, given the approach the departments took, the overall costs of both programmes are higher than we, or the departments, would expect to see in normal times. However, both departments maintained sufficient record of their programmes’ rationale, the key spending decisions they took and the information they had to base those on. They also put in place effective programme management, controlled costs where they could and recovered some of their committed spending once it became apparent that fewer ventilators were needed than they had originally believed.

Read more about our work on the government’s response to the coronavirus pandemic.