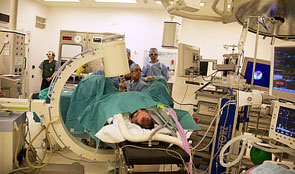 National Audit Office report: The commissioning of specialised services in the NHS

The commissioning of specialised services in the NHS

Against a backdrop of increasing pressure on NHS finances, NHS England has not controlled the rising cost of specialised services.

NHS England’s spending on specialised services has increased at a much greater rate than other parts of the NHS, according to today’s report from the National Audit Office. Although NHS England took responsibility for commissioning these services three years ago, it still does not have an agreed overarching service strategy, consistent information from all providers on costs, access to services and outcomes or how efficiently services are being delivered.

The budget for specialised services increased from £13 billion to £14.6 billion between 2013-14 and 2015-16, an increase of 6.3% a year on average, compared to an increase of 3.5% year on average for the NHS budget as a whole. NHS England has found it challenging to live within its budget for these services and recognises that keeping within its future budget will be exceedingly difficult, even though it has increased the budget by 7% for 2016-17. If NHS England is unable to keep its spending on these services within budget, this will affect its ability to resource other services such as primary care, non-specialised hospital and community services.

Today’s report finds that a number of factors are creating financial pressures for specialised services including the increasing volume of effective but expensive new drugs, and increasing demand for these services. NHS England and Monitor, have sought to control the cost of services by reducing the prices paid (tariff) for NHS Services, but this may have affected provider’s financial sustainability. The NAO finds that national-level contracting has strengthened NHS England’s position to influence providers and reduce prices but it is not clear whether its commissioning hubs have the skills to manage these contracts effectively.

NHS England underestimated the scale of the challenge of commissioning 146 specialised services. It increased its resources for commissioning these services from £20 million with 307 full-time equivalent staff in 2014-15, to £38 million with an estimated 489 full-time equivalent staff in 2015-16. Furthermore, NHS England’s original governance arrangements for specialised commissioning were ineffective and stakeholders have raised concerns about the transparency of decision making.

Data, where available, indicate that there are variations in access to services, quality of services and prices paid for services. For example, in 2014-15, the number of cancer patients receiving chemotherapy per 100 new cancer cases varied from 42 to 77 for those aged under 75 across clinical commissioning groups. In 2014-15, the price paid for a kidney transplant with a live donor varied from £13,000 to £42,000 across the eight centres providing this service.