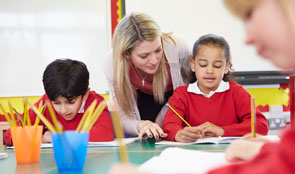 The government needs to do more to demonstrate how new arrangements for training new teachers are improving the quality of teaching in classrooms.

“Training a sufficient number of new teachers of the right quality is key to the success of all the money spent on England’s schools. The Department, however, has missed its recruitment targets for the last four years and there are signs that teacher shortages are growing. Until the Department meets its targets and can show how its approach is improving trainee recruitment, quality and retention, we cannot conclude that the arrangements for training new teachers are value for money.”

Government spends £700 million a year on recruiting and training new teachers, but has missed its recruitment targets for the last four years and it needs to do more to demonstrate how new arrangements are improving the quality of teaching in classrooms, according to the National Audit Office.

The NAO found that 53% of the 44,900 (full time equivalent) teachers entering the profession in 2014 were newly-qualified, with the remainder either returning to teaching after a break or moving into the state-funded sector from elsewhere. Teachers leaving state-funded schools significantly influences the number of new teachers required. Between 2011 and 2014 the number of teachers leaving the profession increased by 11%, and the proportion of those who chose to leave the profession ahead of retirement increased from 64% to 75%.

The overall number of teachers has kept pace with changing pupil numbers, and the retention of newly qualified teachers has been stable. However, indicators suggest that teacher shortages are growing. The recorded rate of vacancies and temporarily filled positions doubled from 0.5% of the teaching workforce to 1.2% between 2011 and 2014. According to the NAO, in secondary schools, more classes are being taught by teachers without a relevant post-A level qualification in their subject. The proportion of physics classes, for example, being taught by a teacher without such a qualification rose from 21% to 28% between 2010 and 2014.
Today’s report found that secondary school teacher training places are proving particularly difficult to fill. The Department cannot recruit enough trainees in the majority of secondary subjects: 14 out of 17 secondary subjects had unfilled training places in 2015/16, compared with two subjects with unfilled places in 2010/11. In subjects with hard-to-fill places, providers are more likely to accept trainees with lower degree classifications.

The Department and its executive agency, the National College for Teaching and Leadership (the Agency), have increased the number of routes by which trainees can achieve qualified status, with an emphasis on training led by schools. Potential applicants, however, do not yet have good enough information to help them decide where to train. Providers and schools told the NAO the plethora of training routes was confusing.

According to the NAO, the Department’s indicators of trainee and training quality are encouraging, but not enough to prove that training is raising the quality of teaching. The proportion of postgraduate trainee entrants with at least an upper second class degree increased from 63% in 2010/11 to 75% in 2015/16. While degree class is a reasonable indicator of subject knowledge, it is a less clear predictor of other aspects of teacher quality.

The Department has a weak understanding of the extent of local teacher supply shortages and whether they are being locally resolved. The NAO’s own research suggests problems in poorer areas, with some 54% of leaders in schools with large proportions of disadvantaged pupils saying attracting and keeping good teachers was a major problem compared with 33% of leaders in other schools.